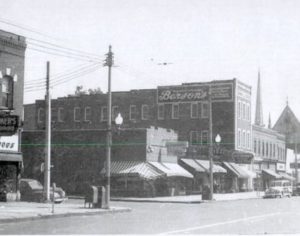 A historic district is a group of buildings or sites that have historical or architectural significance and can be national and/or local. Not every building of the district must be significant, as there is a clear distinction between contributing and non-contributing buildings. The latter are just new constructions that have been included within a district, but which has no historic significance or relevance.

Does it imply limitations or burdens on the owners? In general, the designation of a zone as historic district is honorific and does not limit the rights of the owners in any way. Therefore, you are under no obligation to open your building to the public, and you can sell it as you please. However, if a district is designated as local historic district (locally significant), it is automatically placed under local zoning ordinances which almost always set limitations on building alterations.  Typically, the limitations are limited to the exterior of the structure- like the windows, siding, fencing, and woodwork.

This is exactly the case of Norfolk and Chesapeake local historic districts. All exterior alterations, new constructions and demolitions must be approved by the Architectural Review Board and the Planning Commission that release a Certificate of Appropriateness (COA) to the applicant. COA is not requested for ordinary maintenance, since it does not alter the construction. However, non-contributing buildings are also subject to local ordinances because their alterations could affect the historic features of the zone as a whole. Therefore, any alteration or demolition of any non-contributing construction in the district area also requires a COA.

Alterations are all those changes that alter significantly the building, like new additions, hardened surfaces, porch demolitions, new decks, changes of colors and materials. You can find detailed explanations on the guidelines on the matter that have been published by the city councils of the two towns.

There are historic districts in the surrounding cities also!  Some cities have special funding and/or loan programs available to help pay for renovations.